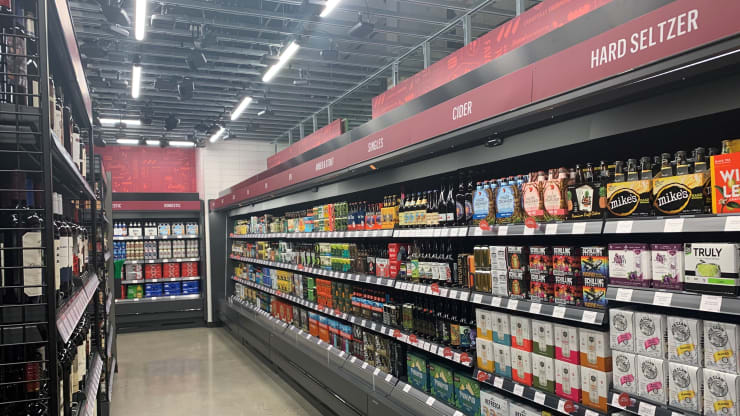 Amazon on Tuesday made its latest push into the grocery industry with the launch of its first, full-size, cashierless supermarket, not far from its Seattle headquarters.

The Amazon Go Grocery store spans 10,400 square feet, making it significantly larger than the original Go convenience stores, which are typically range from 1,000 square feet to 2,000 square feet in size. The new space stocks about 5,000 items and relies on the same cashierless technology rolled out in the smaller Go stores. Shoppers walk in, scan the Amazon app on a turnstile and purchase products without waiting in a checkout line. Cameras and other sensors throughout the store monitor which items you take with you and charge you automatically when you leave.

Amazon’s physical retail footprint has expanded considerably in recent years to include its Go stores and Whole Foods stores, in addition to its Amazon 4-star stores and bookstores. It also plans to launch a totally new grocery store concept, with the first location opening near Los Angeles later this year.

While Amazon has scaled up its physical retail offerings, the stores don’t generate much revenue for the company. Amazon said in its fourth-quarter results that the physical stores segment, which includes Whole Foods, had $4.4 billion in sales, which was a 1% decline from the year-ago period.

The new Go Grocery stores add another layer to Amazon’s already complex brick-and-mortar strategy. Here’s a brief overview of all the other physical retail initiatives Amazon has underway: 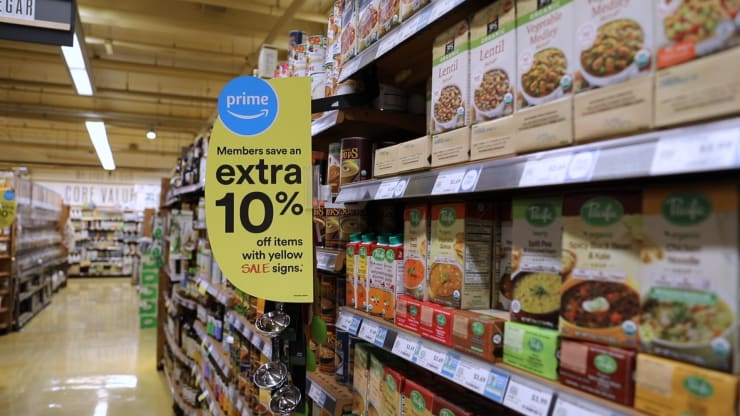 Amazon made waves when it acquired Whole Foods Market for $13.7 billion in 2017. The company now operates more than 500 Whole Foods stores across North America and the U.K.

Since it took over the grocery store chain, Amazon has incorporated its branding at Whole Foods locations and started offering exclusive discounts for its more than 150 million Prime subscribers. The company has also made a range of Whole Foods products available for delivery through AmazonFresh, its grocery delivery service.

While similar in concept, Amazon told CNBC it’s not trying to replace Whole Foods with its new Go Grocery stores. 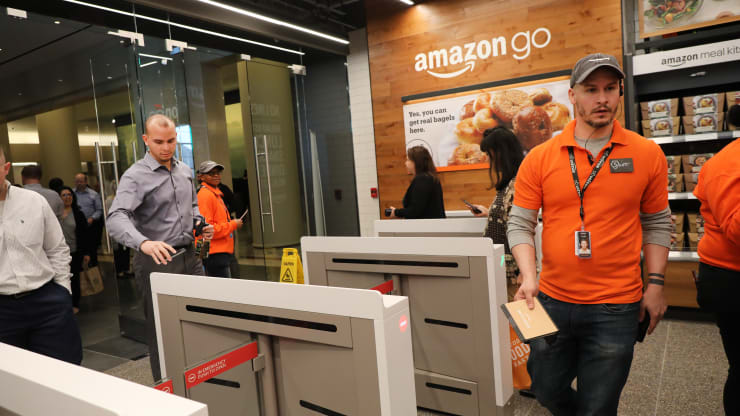 Amazon opened its first cashier-free convenience store to the public in 2018. Since then, Amazon Go stores have expanded far beyond the first location at the company’s Seattle headquarters.

The company now operates 25 Go stores across the country, with locations in Chicago, New York, San Francisco and Seattle. Unlike their larger Go Grocery counterpart, the stores are much more limited in what products they offer. Shoppers can purchase things like grab-and-go sandwiches, salads and coffee.

So far, Amazon has taken a measured approach in its roll out of Go stores, but it may scale its cashierless technology more quickly. CNBC previously reported Amazon is in talks to bring the technology to other retailers, like airport shops and movie theaters.

Amazon has signaled the growing importance of its Go stores. In the company’s 2018 letter to shareholders, CEO Jeff Bezos said they are a prime example of Amazon’s effort to “delight” customers, calling checkout lines “the worst thing about physical retail.”

Amazon also has plans to expand its grocery efforts beyond Whole Foods and Go stores.

Last November, Amazon posted several job openings for a new grocery store that’s slated to open next year in Los Angeles’ Woodland Hills neighborhood. It’s the first location of what is expected to be a new chain of grocery stores launched by Amazon.

Amazon told CNBC the new chain will be “distinct” from Whole Foods, but declined to provide further details on what kind of products the stores will offer or future store locations. 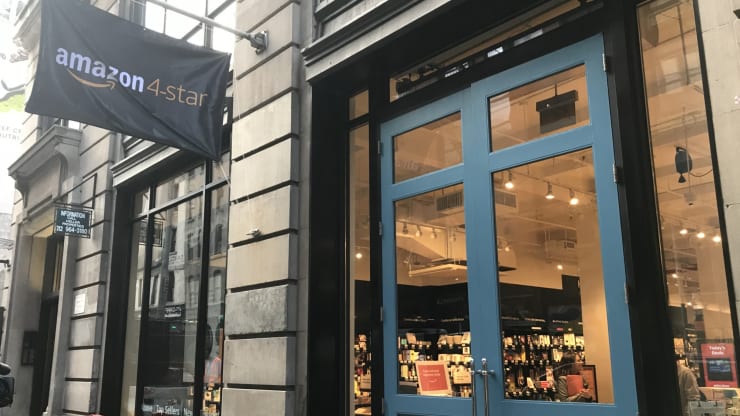 Outside of grocery, Amazon has further expanded its physical retail presence by launching nine 4-star stores in cities across the country.

The stores sell products from its website that are rated four stars or above, including everything from assorted kitchen items to Alexa-enabled gadgets. Amazon rotates inventory each week and displays digital price tags next to each item that show how many ratings an item has received and what the average rating is.

CNBC toured a 4-star store in New York City’s SoHo neighborhood, which included a range of products like travel essentials, board games and items that are “trending” in New York. 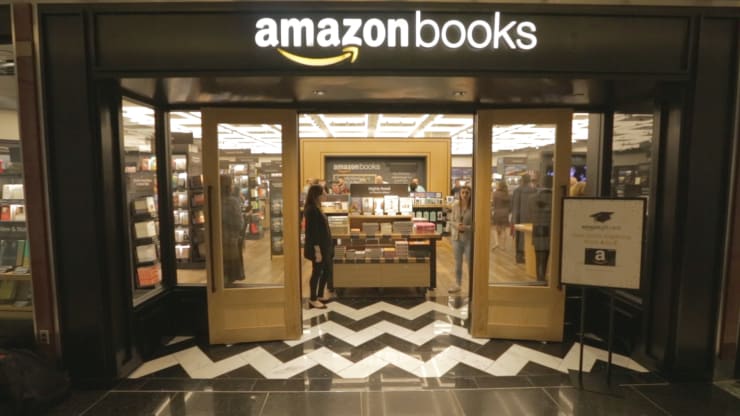 Amazon got its start in 1994 as an online bookseller, making it surprising that the company launched a range of of physical bookstores. There are 21 Amazon Books locations across the US, which feature thousands of titles and a selection of Amazon devices, like Echos, Kindles and Fire tablets.

Similar to its 4-star stores, ratings and reviews are displayed alongside each item. Prime members are also offered items at a discount to regular customers, like they are online.

Amazon has five pop up stores across the country in states including California, Colorado, Illinois, Nevada and Texas. The stores are primarily based out of shopping malls and have a rotating cast of items available for purchase.

Amazon says the pop up stores are meant to allow customers to “try before they buy” an item. Items are usually selected based on a theme or are trending on Amazon’s website.

Amazon currently features bedding products from its private-label business, AmazonBasics, at pop up stores located in cities like Las Vegas and Glendale, California. 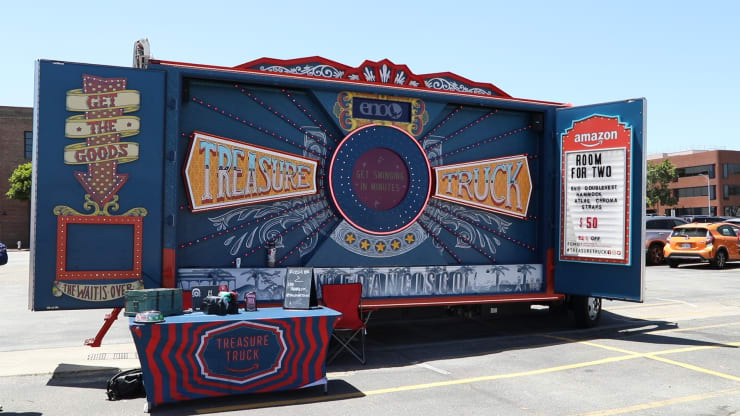 One of Amazon’s quirkier attempts at physical retail are its Treasure Trucks. The mobile shopping kiosks are located in 30 cities across the country and offer one item selected by Amazon at a discount.

Amazon will text users when a Treasure Truck has an item available in their area. Shoppers then purchase the item in the Amazon app and can pick it up the same day at a truck. 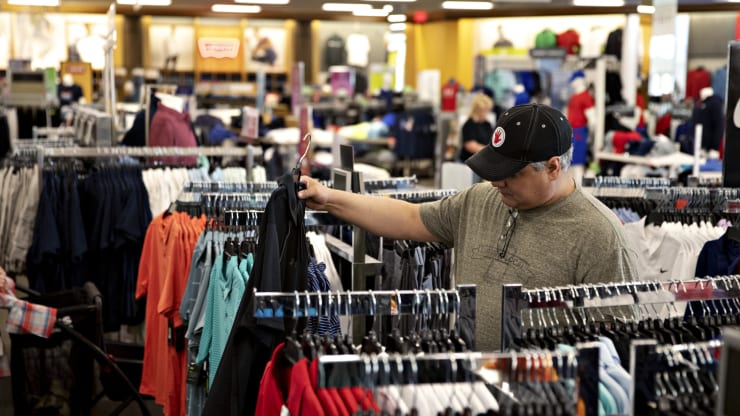 Retail sales expected to climb between 3.5% and 4.1% in 2020, unless coronavirus derails growth, trade group says